What's Next for Methane Regulation for Oil And Gas? Signals from the Biden Administration and Congress

As discussed in this previous post, the state of methane regulation for the oil and gas industry has been in flux over the past few years as federal regulations issued by the Obama administration were challenged in court and then altered by the Trump administration. The Biden administration has signaled that it wants new regulation from EPA to be a top priority. A recent bill unveiled in the House Committee on Energy & Commerce also signaled a desire to more aggressively limit methane emissions.

Unlike prior regulation under the Obama administration, which had a limited practical impact because it only applied to “new sources,” both the new administration and Congress have signaled a desire for these rules to apply more broadly to existing oil and gas sources. Companies in the oil and gas industry should watch this issue closely, be prepared to comment on new proposed regulations, and take steps now to limit natural gas leaks at their facilities, as we expect further action within the year.

As discussed further in this previous post, in 2016, EPA finalized Quad Oa — more formally known as the “New Source Performance Standards (NSPS) for VOC and methane emissions from the oil and gas sector,” which regulated methane from the oil and gas sector, and applied to upstream, midstream, and downstream operations. Before then, EPA had only regulated VOCs from the sector, and because VOCs and methane are both emitted from equipment in the sector, the previous regulations (“Quad O”) had the practical effect of also limiting methane emissions.

EPA decided to separately regulate methane in the 2016 Quad Oa rule because, as EPA had previously explained, the oil and gas industry is a “significant source of emissions of methane, a potent greenhouse gas with a global warming potential more than 25 times that of carbon dioxide.” EPA estimated that the oil and natural gas production, natural gas processing, and natural gas transmission and storage sectors emit 25% of U.S. anthropogenic methane.

While Quad Oa only applied to new or modified sources after the rule’s effective date, promulgating the rule raised the possibility of regulating methane from existing sources.1 In November 2016, EPA sent an Information Collection Request to operators, asking them to identify ways to control methane from existing oil and gas sources. In March 2017, the Trump administration’s EPA canceled the Information Collection Request, and in April 2017, EPA announced its intention to reconsider Quad Oa.

In September 2020, EPA finally completed its review and issued a two rules changing the VOC and methane emissions requirements for new sources in the oil and gas sector (collectively, the “Methane Rules”).

In doing so, EPA explained that the “Clean Air Act requires EPA to make a formal finding that a pollutant contributes significantly to air pollution before setting NSPS requirements. Since the Obama EPA did not make this finding, the addition of the transmission and storage segment to the oil and gas category and the additional methane control requirements in the 2016 rule were inconsistent with the law.”

The Biden Administration: actions to date and likely next moves

On his first day in office, President Biden issued an executive order directing EPA to immediately “consider publishing for notice and comment a proposed rule suspending, revising, or rescinding” the technical Methane Rule by September 2021. The order also directs EPA to “propos[e] new regulations to establish comprehensive standards of performance and emission guidelines for methane and volatile organic compound emissions from existing operations in the oil and gas sector, including the exploration and production, transmission, processing, and storage segments, by September 2021.” In other words, the President is asking EPA to expedite methane regulations for both existing and new sources across the oil and gas sector.

While only the technical Methane Rule is explicitly called out for review, based on the wording of the executive order, it is likely that EPA will also revise the policy Methane Rule, and any new regulation would likely include midstream sources, which are not covered by the current policy Methane Rule. By specifically identifying the methane regulation in this day-one order and setting an aggressive timeline for action by EPA, President Biden has signaled that regulation of GHG emissions from the oil and gas industry will be a top environmental priority for his administration. 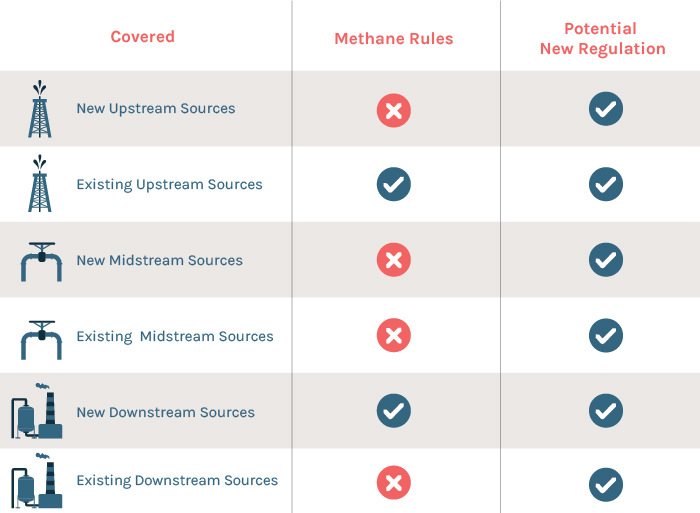 Two U.S. Senators have introduced a resolution of disapproval of the Methane Rule revisions under the Congressional Review Act (“CRA”), and Senate Majority Leader Schumer has indicated that he intends to bring up the resolution following the Senate’s April recess. Revocation of the Methane Rules raises its own array of legal questions about the impact of any action under the CRA and its effect on EPA’s ability to engage in future methane-related rulemakings.

The bill further directs EPA to finalize regulations by the end of 2022 to prohibit routine flaring from natural gas sources, as well as regulations to reduce routine flaring from existing sources by 80% and 100% below 2017 levels by 2025 and 2028, respectively. The bill would allow for “safety flaring.” The bill proposes to achieve these goals by using EPA’s existing authority under Section 111 of the Clean Air Act (”Section 111”).

The bill’s proposed requirements and timelines are problematic for several reasons. First, Section 111 instructs EPA to take cost-effectiveness into account when imposing new requirements, and it is hard to imagine a cost-effective way to drive the bill’s desired level of reduction across the entire oil and gas sector on the proposed timeline. EPA will likely struggle to craft the “best system of emission reductions” required by this bill while still adhering to the language of Section 111.

Second, instructing EPA to issue such rules on the aggressive timeline specified in the bill may not be achievable and may open EPA up to potential legal challenges if it fails to do so or needs additional time to craft appropriate regulations. Because the existing Methane Rules were also promulgated under EPA’s Section 111 authority, EPA arguably needs to first rescind the policy Methane Rule and provide a justification for separately regulating methane from the oil and gas sector before it can implement the directives in this bill. Then, as described above, EPA must propose a new methane regulation for new and modified sources before then proposing a methane regulation for existing sources in the oil and gas sector.

Given the steep cuts envisioned by the bill, EPA will have to regulate existing sources (which account for a far greater percentage of sources than “new” sources). Each of these steps will take months at a minimum to complete and will collectively compound EPA’s difficulties in completing all of the necessary actions under the bill’s proposed timeline.

Simply put, the bill may be asking EPA (and the industry) to do too much in too little time.

What companies can do to prepare

Members of the oil and gas industry should continue to watch for new regulations from EPA related to methane gas emissions. Even without congressional action, EPA is likely to release new proposed rules in the upcoming months that would further limit emissions from the industry, and industry members will typically have about 30 to 60 days to file comments with the agency flagging concerns, technical issues, or legal arguments that they may later wish to make in challenging a final regulation. Filing public comments, either individually or as part of a trade group or coalition, can be a valuable way to provide input to EPA on the final regulations.

In addition, the industry should begin to prepare now for new regulatory requirements and potential environmental enforcement actions brought by EPA and DOJ. Companies should take the time now to develop and implement a leak detection and repair (LDAR) program to reduce natural gas leaks at their facilities. Such leaks are a source of VOCs, and EPA enforcement of VOC violations is already on the rise. Addressing such leaks now, and implementing a strong monitoring program, will also have the added benefit of reducing methane emissions that result from these same gas leaks. Companies with existing LDAR programs should assess the scope of their LDAR programs, identify data gaps, and assess potential costs for expanding coverage to prepare to respond to any future proposal from EPA.

Disclaimer. The Materials IN THIS REPORT are provided “as is” without warranty of any kind. ESG DYNAMICS, LLC disclaims all warranties, whether express, implied or statutory, regarding the Materials, including without limitation any and all implied warranties of merchantability, accuracy, results of use, reliability, fitness for a particular purpose, title, interference with quiet enjoyment, non-infringement of third-party rights and any warranties or conditions arising out of course of dealing or usage of trade. Some states do not allow the exclusion or limitation of implied warranties, so the above limitations and exclusions may not apply, in whole or in part, solely in those states.

ESG DYNAMICS, LLC retains all worldwide right, title and interest in and to the Materials and any derivative works or enhancements thereof, including all worldwide intellectual property rights therein.